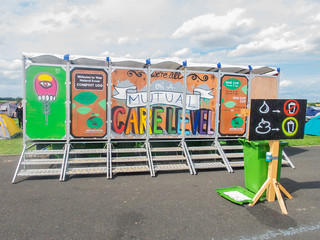 For the past two weeks I’ve been struggling to come up with an idea for my NaNoWriMo project. While I feel like I am not doing well with outlines I am not a pure discovery writer either. I need to have some idea and some world building to get started with any story.

Child of Ceres was based on an idea that was years in the making and even after that I polished it for at least two months prior to writing even the first page. For SleepZone I spent one afternoon brainstorming weird ideas one of which was “there is a serial cat murderer on your street”. After the brainstorming session it took me at least another week or two, to get started writing. For my unnamed fantasy story I had about a month from “I have a genre but no idea” to the deadline, and I made it from idea to “finished” story in about 3 weeks. That left me with slightly less than 4 weeks for my NaNoWriMo preparations and I started out with no idea at all. I checked out my notes of old ideas and I found that I didn’t like any of them. For most of those ideas I have spent considerable time in the past to try and get them ready to be turned into a story and failed.

So while I was finishing the revisions of the unnamed fantasy story, I started thinking about the next project. Somehow it slipped into my mind that it would be a SciFi story. Then my subconscious weeded out all the SciFi subgenres that do not apply to me: hard sf – never, I couldn’t do the research; military sf – no for the same reason as hard sf, plus I am just not into that; space opera – I like to read about spaceships but I don’t like to fly them; dystopia – lately that one screams young adult at me and I don’t feel like writing YA, at least not right now; so my subconscious went for the grown-up version of a dystopia, also known as cyberpunk. A genre more or less founded with one of my all-time favorite books: Neuromancer and it combines the two things that fascinate me the most about SciFi anyway: future technologies and future social development and how they impact each other.

But once I knew that, I was stuck. Utterly and completely stuck. So I listened to a few episodes of Writing Excuses. I did several brain-storming sessions. I got out an actual pen and a paper notebook and scribbled pages full with nonsense. Still stuck. I scrolled through the Future, Science and Geek categories of my news-readers. I found out that such a thing as Tetrachromacy exists (read Black Prism to find out why this is fascinating). No ideas at all. It’s less than three weeks till NaNoWriMo starts and I had nothing but a genre.

A nice thing about knowing it was a cyberpunk story instantly fixed some of the setting parameters in my mind: a near future setting with cool but semi-realistic technologies and big corporations rule a world that is under constant surveillance. The remaining variables will be attended to in due time. Then I decided I would have three POV characters. I had an idea for two of them immediately. Because I am that way, I spent then two or three hours finding names. (I recently discovered that renaming a character once it’s been written is quite hard.) The third character – my actual protagonist (probably) – still eluded me. What eluded me also was the “cool but semi-realistic technology” that would transport the setting, could be used as plot-device and would give me a general idea where my plot might be headed.

While I like my structures, I also work forwards – not backwards like a typical outliner. I keep having to change my endings and my endings change themselves while I write the story. From what I have seen, heard and read, it seems so much easier to work from an idea for an ending. But I never have ideas for endings, not until I know all the rest and often not then. So I was stuck again. No cool technology appeared to save the day. At least none that I wanted to use. Nanomachines were gnawing at my brain, teleportation devices begged to be written, food pills waited to be eaten … nothing fit with the vague idea of a plot that was floating just out of reach.

That was yesterday. Sometime this afternoon, while I was reading a chapter of Maze Runner (after listening to James Dashner on Writing Excuses, I had to), I just couldn’t concentrate on the book, my own nebulous plot kept intruding.

So I sat down made up my mind to use X for the cool technology/plot device thingy and made 21 squares on a page and put the names of my POV characters in them. Why 21? NaNoWriMo wants me to write 50.000 words. I wanted to give each of my view point characters about the same amount of space in the story (which will change, but it’s kind of nice to think I will do it that way) and 2500 words for a chapter sounds like a reasonable amount of stuff I could write each day. And suddenly the ideas started flowing and now I have something of an outline which includes – gasp – an idea for a start and – double-gasp – an idea for an ending as well! And it turns out that technology X is not quite so plot-dictating as I thought it would be. All that brain-wrecking for nothing.

So the past week of very intense and stressful days (you wouldn’t believe how stressful just thinking about a story can be) culminated in about 3 hours of outlining. Now I can finally get started on the research part, because it turns out I need to do some of that.